“What an incredible journey from eight students to over 150 some Fridays visiting their school-based youth pantry. They come not just for the food but also for the warmth and unconditional love our angels dressed as volunteers provide to them. A child told us a message in July 2016, and it is growing more robust and more significant than we imagined. Thanks to you, whether you are a donor or volunteer, for you are allowing us to

“go home and get more food for the children who are hungry.”
Kathy Petersen,

Co-Founder, President of the Board and Executive Director (100% volunteer).

We nourish our neediest students by providing food, tutoring, and mentoring in a manner that respects dignity and individuality, while sustaining dreams.

July 2016 – Emmanuel Episcopal Church helps Joy Fellowship Church’s adult food pantry in Wolverine, Michigan, by providing 50 bags of weekly groceries during the summer for elementary children dealing with hunger daily with a total of around 500 bags of groceries.

August 2016 – On one Sunday, a 9-year-old girl asked Kathy Petersen how many bags were needed. Kathy replied 50. The girl replied adamantly, “Well, I think you are going to run out of food. So, I will go home to get more food for the children who are hungry.”

That week Kathy learned middle school students do not receive Manna’s supplemental food packs each Friday as they did in elementary school. She believed the young girl’s message was telling her church to open a middle school youth pantry similar to an adult pantry. The church agreed to ask the middle school if they were willing to do it with Emmanuel’s help.

August 2016 – Kathy Petersen and Joy McBride visited Dana Pinney, and Colleen Pattullo, Petoskey Middle School counselors, and Jon Wilcox, Principal, about the idea of a middle school-based youth pantry. They immediately said, “yes!” So, the work began on how and when to open the first youth pantry. They decided to call it the Northmen Den.

November 2016 – Emmanuel’s Beyond Our Walls committee wrote and received a $4,400 grant from the Episcopal Western Diocese to open the first Northmen Den Youth Pantry in January 2017. The counselors invited eight students on the first day to see if they “liked it.”

By the end of that first day, ten additional students who were told about the “free food” from the first eight came to visit and to take home groceries for the weekend. The following Friday, there were 25.

March 2017 – The Northmen Den received its 2nd grant from Women Who Care of $8,200. That grant helped us open our second Northmen Den at Petoskey High School in the fall of 2017. More and more donations began arriving to help us buy the food, toiletries, school supplies, and new clothing. More students were coming too, with around 60 each Friday.

March 2018 – Our 4th Youth Pantry opened at Lakeview Academy, the court-appointed Emmet County High School. The youth pantry is called Lakeview Locker. Each Friday, around 120 students were coming to our four youth pantries.

April 27, 2018 – Child Abuse Prevention & Education Council presented to Northmen Den and Kathy Petersen the Champion for Children Award to recognize our service to our community’s children.

April 2018 – Fletch’s and Harbor Bren Insurance Agencies called us and wanted to sponsor Give A Kid A Chance Food Drive for the youth pantries. Darla Smela and Robyn Rakoniewski were chairpersons for the month-long community event. It raised incredible awareness, food donations, and needed money. 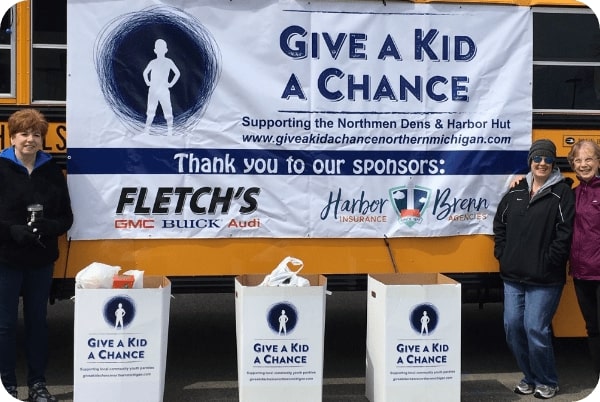 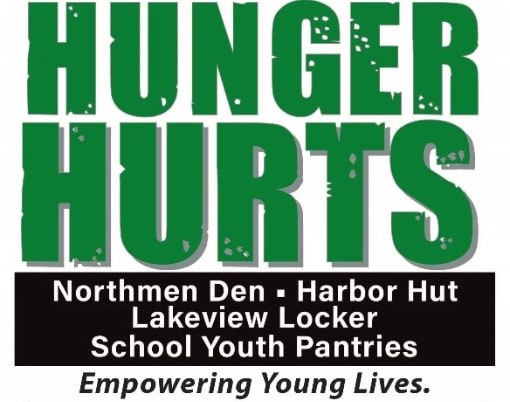 September 2018 – Our First HUNGER HURTS campaign brought awareness and funds about the plight of 1 out of 3 students dealing with HUNGER daily in Petoskey and Harbor Springs.

May 2018 – We surveyed the high school Northmen Den students about having our volunteers tutor them with reading, writing, and math. Seven students said YES, thirteen said Maybe, and three responded No. We realized students trusted our volunteers and wanted more from our program.

March 2020 – COVID-19 closes schools. Northmen Den and Harbor Hut packs up all remaining food in the Middle and High School Youth Pantries to be given to families struggling to provide food for their children with schools being closed. 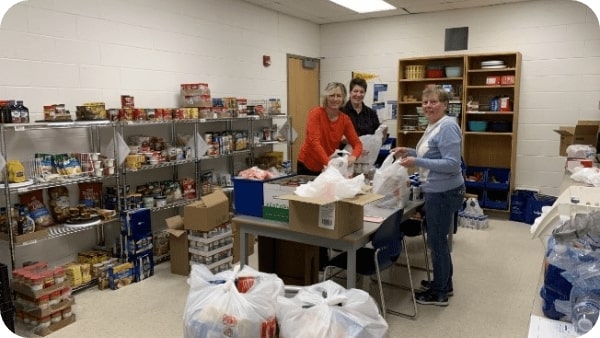 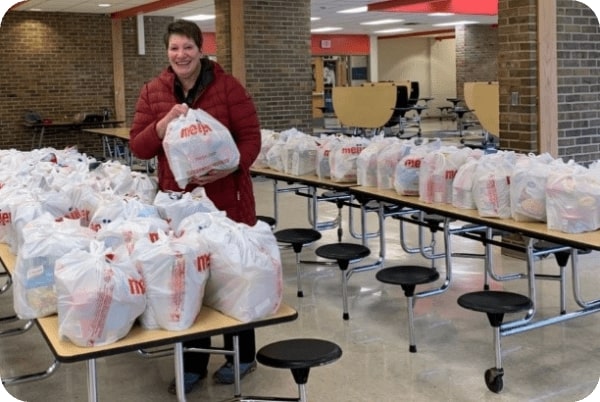 March 2021 – Emmanuel Episcopal Church realizes Northmen Dens, Harbor Hut, and Lakeview Locker Youth Pantries have been embraced by Petoskey and Harbor Springs communities as a significant ministry and should become its own charity. Kathy Petersen asks Joyce Riordan and Sue Droste to be the first three Board members to submit our Articles of Incorporation as Northmen Den Youth Pantries, Inc. Articles of Incorporation were filed and approved by the State of Michigan on May, 2021. 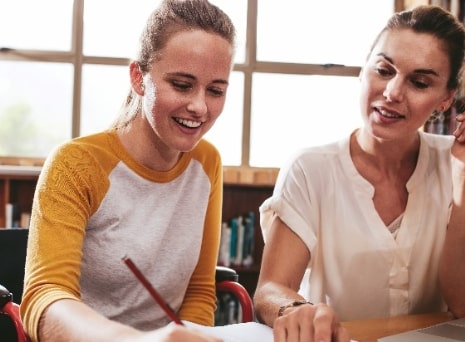 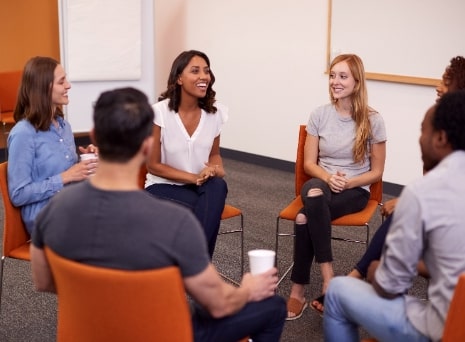 October 2021 – Northmen Den Youth Services offers SPARK Mentoring after-school at the Carnegie with a group of 25 diverse students from high to low-risk, high to low achievers. SPARK (Speaking to the Potential, Ability, and Resilience Inside every Kid) educates people about their mental health and resilience and shows them their most genuine and unique potential, regardless of circumstance. Five adult mentors and one certified, trained SPARK Facilitator instructs this 9-week session.