“It doesn’t take long for a child in middle school, struggling with poverty and especially hunger, to realize they are different: they might smell, don’t dress as nicely as the other kids; don’t participate in extra-curricular activities; or classroom discussions, and so they become invisible. By the time they reach high school, they are forgotten. That’s the true cruelty.”

As one young boy told us, “The Northmen Den helps me a lot in school. My family does not have much of anything.” 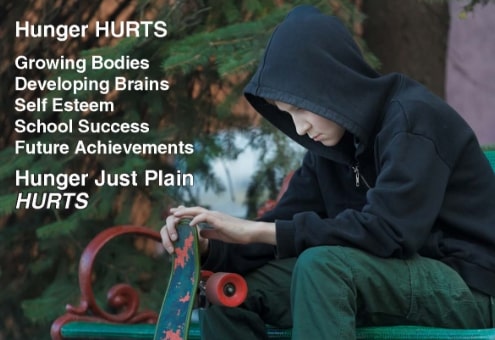 In Michigan, 1 in 5 kids struggles in poverty. Here in Petosky, 1 in 3 children are dealing with hunger daily. In rural areas like Emmet County, parents tend to have less education and are more often underemployed, meaning children in rural areas are at higher risk for living in a low-income family. It only takes three generations of this struggle to create a legacy of poverty. The longer a family is in poverty, the more resources they lose, and it becomes harder to escape.

YOU can provide help and hope for these students by donating just $30 to provide two students food for the weekend.

one of our Northmen Dens success stories because of you,

your donation provided weekend food for herself and her family. She visited the MS and HS Northmen Dens weekly since middle school. She graduated this June, 2021.

“Hey its Sam, I miss you a whole lot and I hope You’re doing great, I have an invite to my grad party for you and I have some great new…

I GOT ACCEPTED TO NCMC!!!

We met Samantha in November 2016 when she was one of the first eight students who had been chosen to try out the Petoskey Middle School, Northmen Den Youth Pantry. That day after taking three bags of groceries to her locker, Sam told several of her friends about the Den, who in turn came down to shop.

One Friday, she came sobbing into the Den to fall into Mrs. Petersen’s arms because her family had had no electricity for the whole week. Her Grandma chose to pay the rent rather than the electric bill. “We have no

food, and our house is freezing. Can you help?” she pleaded. We got the utility bill paid. At this moment, Samantha saw the Northmen Den as a valuable resource not just for food but for help navigating the twist and turns of living in poverty.

In our five years of knowing her, her smile was contagious, her hugs went to every volunteer in the Den, and she was open to telling us how she was struggling with anxiety, depression and needed a “weighted blanket” so she could sleep. (Of course, we bought her one.) And, through all the complexities, she possessed an enormous amount of compassion, love, pride, and understanding for her large complicated family.

We saw her as a true advocate for students struggling with hunger by bringing or sending them down on Fridays. When she was in 10th grade, she learned that a group of boys who weren’t in need were visiting the HS Den as though they needed the food, she was furious. She confronted them, telling them to STOP stealing food from the kids who needed it or there would be consequences! They knew Sam and knew she meant it. They never came back!

She loved the food, the brand-name shampoos, deodorant, Tide detergent, and clothing, but she loved and needed the most was the emotional support our volunteers provided her throughout many trying times in her young life. Her family life is complicated, but that has not stopped her dream of attending college and being the first to do it. Our volunteers have been pretty strong advocates to say, “yes, you can do this!” whenever she doubted her ability to do better in algebra or finish a paper. The volunteers became her safety net to keep her dreams alive. They helped her believe she could write a better future story for herself.

So, after receiving her text invitation to her graduation, three Northmen Den volunteers, Kathy Petersen, Sue Droste, and Alice Yankoviak sat in the bleachers on a hot Sunday to be at her graduation. We jumped up as though she was our daughter when she walked across the stage with big cheers.

I would love to catch up too that would be so great! Thank you so much

I cried honestly because
it took a lot to get here, I wouldn’t
have done it without you all!

Our mentoring relationship with Sam is not over, for she plans to become a SPARK Mentor to help other students to believe in their dreams. And, she is going to be our Northmen Dens Youth Pantries Youth Advisor while attending Northern Michigan Community College.

Thanks to all of you who have given to our mission, your donations have allowed this 13-year-old student who we met at the opening of our very first youth pantry to not be “one of our Forgotten Children.”

Thank YOU for not letting these three young adults be forgotten for they will be a inspiring contributors to our community and to the world! 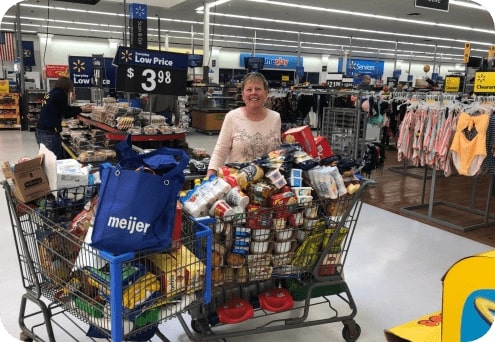 Our volunteers shop each Thursday at Walmart, Meijer’s and Manna. The cost of a weekly supply of food costs between $1400 – $1600. Thank you for all providing donations to help our most vulnerable students. Here is Sue Droste, Northmen Den coordinator, filling 5-6 grocery carts with her other volunteers. 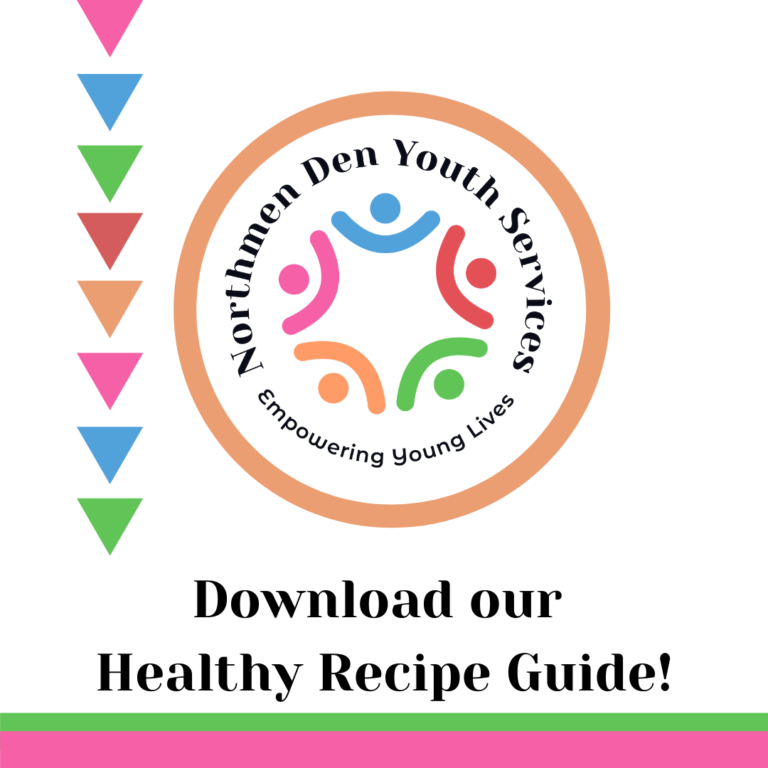